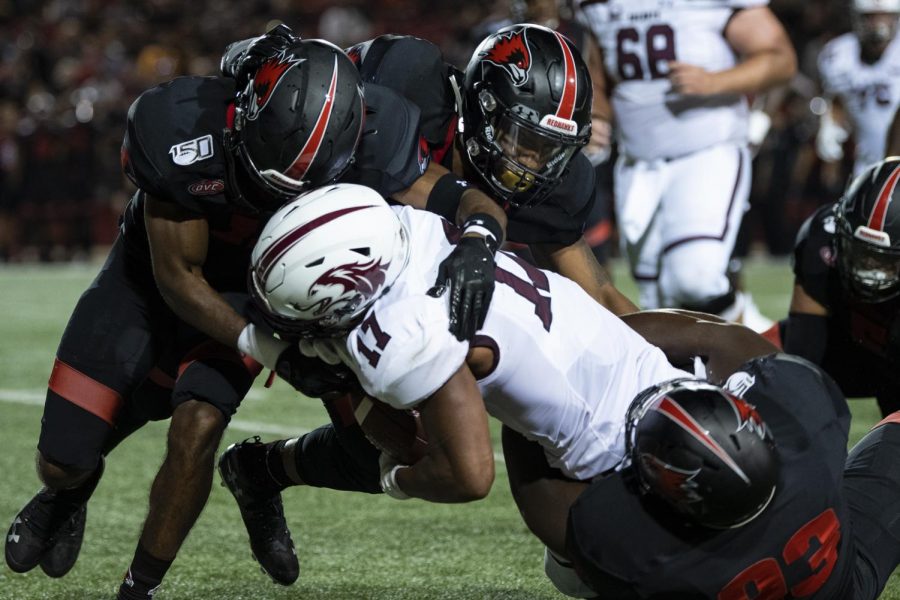 Saluki junior wide receiver Landon Lenoi gets tackled by multiple Redhawks on Aug. 29, 2019, during the Salukis' 26-44 loss against the Southeast Missouri State Redhawks at the Houck Stadium in Cape Giradeau, Missouri.

Saluki Football Defensive Coordinator Jason Petrino discussed the team’s preparation for the upcoming game against SEMO in his press conference on October 21.

The Salukis defense dropped their points allowed per game last season to 23 when they averaged allowing 40.73 points per game in 2018.

Petrino said he doesn’t look too far into the points they allow and is primarily concerned about getting the offense back on the field and limiting the big plays.

Petrino said the players who started the SEMO game last year mostly aren’t at SIU anymore. So the new players need to be prepared.

Petrino discussed the difficulty of replacing former safety Jeremy Chinn and new adjustments to the defensive lineup he currently has.

“The guys that we have don’t have the same skill set as the guys that were out there obviously there’s nobody that’s going to replace Jeremy Chinn,” Petrino said. “But at the same time it’s like, what did that individual do well, that we can put them in a situation where he can play at a high level and do the things we need him to do.”

Petrino said the primary key for the defense is tackling so they can limit the big plays and keep SEMO from scoring.

Over the past few seasons, SEMO has been a running team and Petrino said he expects Redhawks to still look to run the ball first.

“They want to run the football, and be able to run it no matter what the box looks like. And that’s going to be the tremendous challenge we talked about a year ago, they had a lot of uncertainty at O-line but now coming back, they’ve got all but one of their starters back on the O-line,” Petrino said.

SEMO’s new quarterback this season is Andrew Bunch, a transfer from Nebraska and Petrino said he expects him to be a running threat and he was impressed with his past performances.

Petrino talked about Makel Calhoun, an outside linebacker for the Salukis and his thoughts on him going into his junior season.

“He was very productive in the plays that he was out there, and I think he has a really great grasp of our defense,” Petrino said.

On Oct. 22 the Saluki Athletics announced tickets to the SEMO game will be limited to family members of players due to new restrictions in Region 5 that have placed limits on public gatherings.

Previously, SIU was allowing 20% stadium seating capacity with all season ticket holders and some SIU students being permitted to attend.

The game will be televised locally on KFVS-12 and nationally on ESPN3 which is seen only on ESPN.com.