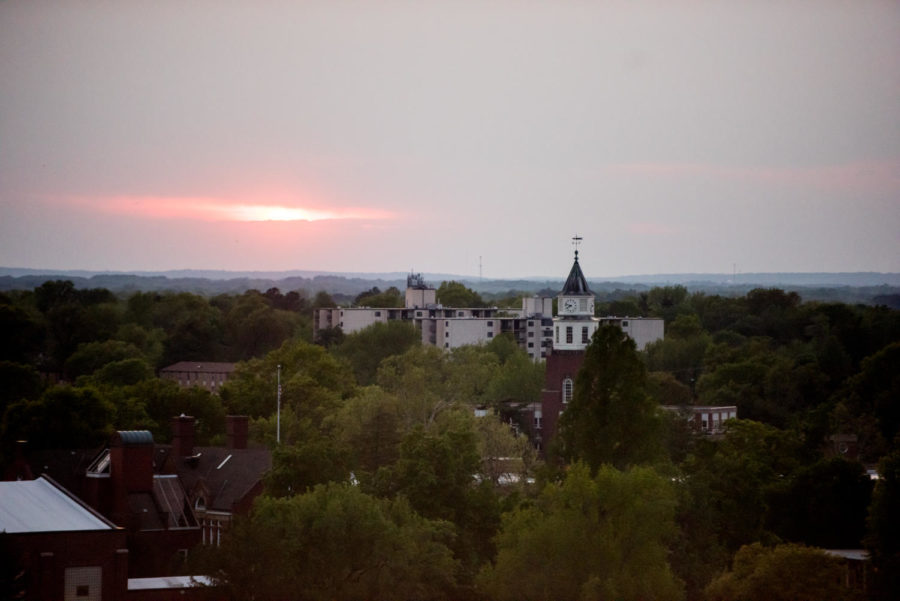 Karen Schauwecker, the sustainability program coordinator for SIU, said many schools track the progress of their sustainability initiatives through the Sustainability, Tracking, Assessment, and Rating System, or STARS program.

Many colleges whose STARS reports showed they pursued a local food program in the past have either discontinued or severely curtailed their efforts.

The Local Food, Farms and Jobs Act was intended to expand the local farm economy throughout Illinois.

A study published in 2009 by the Local Food, Farms, and Jobs Task Force that made legislative recommendations reported that only 4% of food consumed in Illinois is purchased locally even though about 80%  of the state is farmland.

The other 96% is imported from other states or countries while farm products in Illinois are shipped out of state.

Chuck Paprocki is on the Carbondale Spring Food Autonomy Initiative Board of Directors, and contributed to the task force.

“Our farmland is being wasted,” Paprocki said.

In the early years of the local food buying program, Southern Illinois University seemed to be on track to meet the 2020 goal.

William Connors, the former executive chef for SIU University Housing, was a member of the task force  which was formed in 2008 and made sustainability and supporting local food systems a priority.

Connors told the Daily Egyptian in 2015 that SIU was already purchasing 15 to 17% of dining hall food locally.

In some years before 2015 SIU had purchased 24 to 25% of food from local sources according to Connors.

“We found that when we submitted our report for the 2019 version of STARS, we were not going to meet that 25% or 10% or anything close to 10%,” Schauwecker said.

Of the 59 public schools in Illinois, 13 have a STARS profile to publicly self-report their sustainability efforts.

Only seven schools reported pursuing a local food purchasing program at any point since the local foods legislation was passed.

Based on the reports the University of Illinois Urbana-Champaign, Joliet Junior College, and SIU were the most successful Illinois colleges when it came to local food purchasing.

Leslie Duram, the director of environmental studies at SIU, also contributed to the task force.

She said the statewide initiative was, “suggestive rather than actionable,” and beset by problems from the beginning.

To get the measure passed it couldn’t require additional funding from the state, which meant there was almost no money for programming.

The legislation also couldn’t be a binding resolution because most public institutions couldn’t afford to buy or process local food without additional funding.

Paprocki said he and Duram had meetings with Carbondale Elementary School District 95 to explore the possibility of getting local food into elementary schools.

Paprocki said he was told the schools, “couldn’t have someone peel apples all day.”

Duram said another part of the problem is that schools are limited by state regulations requiring schools to purchase the lowest cost foods and USDA subsidies which favor a few select distributors.

On top of everything, Illinois schools had to cope with a massive funding crisis during former Gov. Bruce Rauner’s tenure, and had little-to-no state funding for sustainability programming.

“It was dire straits to be honest,” Duram said.

Dave Bishop was the president of the Local Food, Farms, and Jobs Council, which was formed as a result of the legislation.

“When we got into the Rauner administration, he didn’t really have much interest in it,” Bishop said.  “He didn’t really attempt to use it for any sort of advice as it was intended.  So it kind of trended downhill.”

Paprocki and Bishop are skeptical when it comes to renewing enthusiasm for the local food initiative or passing new legislation after their experiences on the taskforce.

“I think it’s more viable to build the system and pay for it locally,” Paprocki said. “Personally, I have no trust in the state.”

Bishop said a local food project in Lincoln, Ill. could serve as a model for future programs.

“Lincoln Elementary District 27 decided they were very much interested in getting local food in the cafeteria.

They had no idea how, who would advise them to retrofit the cafeteria, who would pay for all that,” Bishop said.

In 2019, the school district got a grant from a local hospital to rework their facilities, retrain staff, and begin purchasing food locally.

Now, “around 40% of the food being served in the cafeteria is being bought locally. Our farm [PrairiErth] is one of the suppliers,” Bishop said. “That is a bigger success story than this government program ever got done.”

Duram and Schauwecker are hopeful that SIU can get back on track.

Schauwecker believes a few dedicated people could turn things around.

“With anything in a university, there are ebbs and flows. There are times when programs are at their full capacity, and then there are other times when they aren’t,” Schauwecker said. “I think

Chef Bill was willing to take the time and the energy and devote some resources in order to support the local food system because he was personally passionate about it.”

Staff reporter Jason Flynn can be reached at jflynn@dailyegyptian.com.