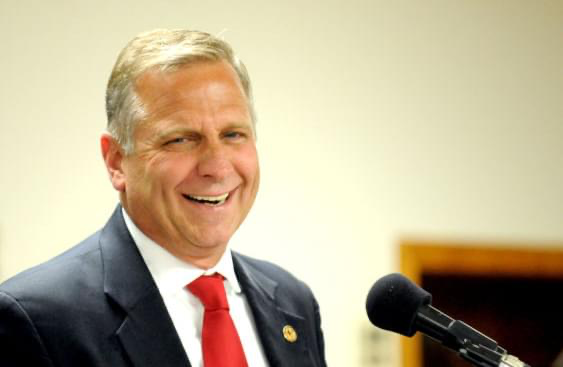 Mike Bost, the incumbent representative of Illinois’s 12th district, has served in the United States House of Representatives since January 2015.

Bost is a member on three House committees, previously served three years in the Marine Corps., and later ran his family’s trucking company until he was elected to Congress. Bost is running for re-election against Democratic candidate Ray Lenzi, a Carbondale resident and former SIU student.

DE:  In the last five years, do you feel you have had a positive impact on the House of Representatives?

“Most definitely. You know, we’ve worked on unbelievable things like tax reform just to get a list of things. I’m actually very involved in three committees that are vitally important to my district, its Transportation and Infrastructure, Veterans Affairs and AG (agriculture),” Bost said.

Bost said seniority in the House is important. “[It] allows you the opportunity to get the experience around here and then become respected with the other members. I’m actually now also trained for this next run to be chairman of the entire V.A.”

DE: Is there anything you’re working on right now that you feel you won’t have a chance to get accomplished unless you’re re-elected?

“I believe voters will send me back. That said, my top priority, and it has to be, is trying to deal with COVID: start finding the vaccine, help our communities and businesses come back stronger than ever. We also need to get our kids back to school, and get them back safely. With the PPP (paycheck protection program) loans 10,000 businesses in my district have received over one billion dollars in loans,” Bost said.

Boat said he and the Republican Party’s “agenda” would be to rebuild the country following the COVID-19 crisis.

DE: One of the main issues your campaign covers is “simplifying” the tax code, as well as putting a stop to rising taxes. With the current situation involving COVID, and the amount of spending going towards relief, is it possible to not increase taxes?

“Sure. This is where a lot of people get confused on that. It’s [the economy] like a horse waiting to start the race and we’re holding back on the reins because of COVID, but now when it’s time to release it, it’s going to come roaring back. Raising taxes stifles economic growth, and we proved that by what we did before COVID and how the economy was booming to allow us to compete in a world market,” Bost said.

DE: In 2020 you’re sharing the ticket with a few other candidates, can you give us your opinion on some of these other races happening in Illinois?

“It’s a different time for campaigns. The reason why I say that it’s a different type of campaign where you used to be able to go out and go door to door and do major events and all of that. Now you do virtual events, but you’re not having the big crowds because of the concern, of course. And I also know what the COVID virus is doing in the particular area that you might be campaigning. It’s a different time,” Bost said.

Bost said Republicans are currently working to gain a foothold in congressional districts around Chicago.

DE: Also on the Illinois ballot is a vote to repeal the state constitution’s law barring a graduated scale tax. What is your opinion of this measure?

“I am and will advise everyone to vote no. They say, ‘oh, no, it only affects the rich’ no, it doesn’t. It is a tax increase on everyone. But it’s up to the voters to make the decision,” Bost said.

Bost said what the state legislature does not mention in the measure’s campaign is the ability for the state to create ‘sudden tax increases.’

DE: Currently the graduated tax plan as laid out by the Illinois legislature shows that 97% of Illinoisans would have lower taxes, so what do you mean by “not just the rich will be taxed more?”

“I think that is a selling gimmick,” Bost said.

Bost said as a result of the graduated tax, more jobs and people would begin leaving Illinois.

“Every state that has a graduated income tax, allows their legislatures to increase taxes. And I know they say it’s not in the bill, but the experts say that the next thing around the corner, they will start taxing retirement income because then it’s just a vote of the legislature to get that done,” Bost said.

DE: We want to thank you for your time, and would like to ask you for some final words.

Staff reporter George Wiebe can be reached at [email protected] To stay up to date with all your southern Illinois news, follow the Daily Egyptian on Facebook and Twitter.