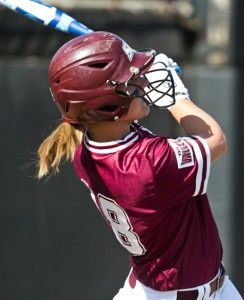 After starting the conference season 0-4, the Saluki softball team has won seven of their last nine conference games to inch closer to first place in the Missouri Valley with three weeks left in the regular season.

The Salukis (19-20, 7-6 MVC) have won their last three series against conference foes, including a three-game sweep Saturday and Sunday against Missouri State. After recognizing their recent trend of winning two out of three games each series, Coach Kerri Blaylock said she was pleased to see her team get over the hump and finally pick up a series sweep.

“I’m tired of winning two and dropping one,” Blaylock said. “It was good to win three in a row.”

The Salukis are now fourth in the MVC with a 7-6 record and 15 conference games left in the season. Creighton leads the Valley with a 10-2 conference record, second-place Drake sits at 9-4 and defending champion Illinois State ranks third at 6-5.

SIU, the preseason conference favorite, has struggled to find consistency for most of the season. The Salukis limped out of the gate and went 7-8 in their first 15 games, all coming in Florida.

The Salukis found success at home as they posted a 10-7 record at Charlotte West Stadium since the Florida trip, but they have struggled on the road with a 2-6 record.

However, SIU has found the perfect time to peak as the team picks up pivotal wins during the season’s final stretch.

The team’s recent offensive production has been key to the Salukis’ turnaround. Last season, SIU displayed one of IT’S best offensive seasons in school history. Five players hit above .300 en route to a 36-20 record.

“The word is out on us, people know we can hit,” hitting coach Jen Sewell said earlier in the season. “We used to get a lot of No. 2 and No. 3 pitchers thrown against us, and now we’re getting everybody’s best game.”

This proved true as Northern Iowa’s ace pitcher Jamie Fisher, returning MVC Most Valuable Pitcher, threw 18 innings in a March 23 doubleheader to sweep the Salukis in a pair of one-run games.

Despite the defeat, SIU’s bats have come around in the last few weeks, led by senior outfielder Morgan Barchan.

Barchan has taken firm control of the lead-off spot in the batting order, a spot that was up for grabs early in the season.

Junior infielder Jayna Spivey is leading the team in power numbers this season and is making a strong case for first team all-MVC.

Spivey is hitting .317 and ranks second in the conference with 10 home runs. She is also second in the Valley with 35 runs batted in and third in runs scored.

Spivey’s numbers have continued to rise as she hit a walk-off grand slam in game two of Saturday’s doubleheader against Missouri State for the 7-5 Saluki win.

Spivey was walked four times in game three, including two intentional walks. MSU had no choice but to pitch to Spivey with a runner in scoring position in the bottom of the ninth, and the junior infielder burned the Bears with a two-out single to center field to score the game-winning run, her second walk-off hit of the series.

“I knew during that last at-bat they weren’t going to put me on,” Spivey said. “I just tried to be clutch for my team.”

Blaylock said the sweep against Missouri State was huge for her team’s progress this season.

“We’re able to play with a lot of people if we play level-headed, stay under control and don’t lose our minds,” Blaylock said. “This was a big series for us.”

The Salukis look to improve their record when they head to Evansville, Ind., Wednesday to take on the Aces in a doubleheader before they travel to Creighton Saturday for a weekend series against the Bluejays.