“I’d like to see a system where we are not so quick to criminalize everything. I believe there are many situations when the police are called and they shouldn't be. I want a system that helps people before we punish them,” 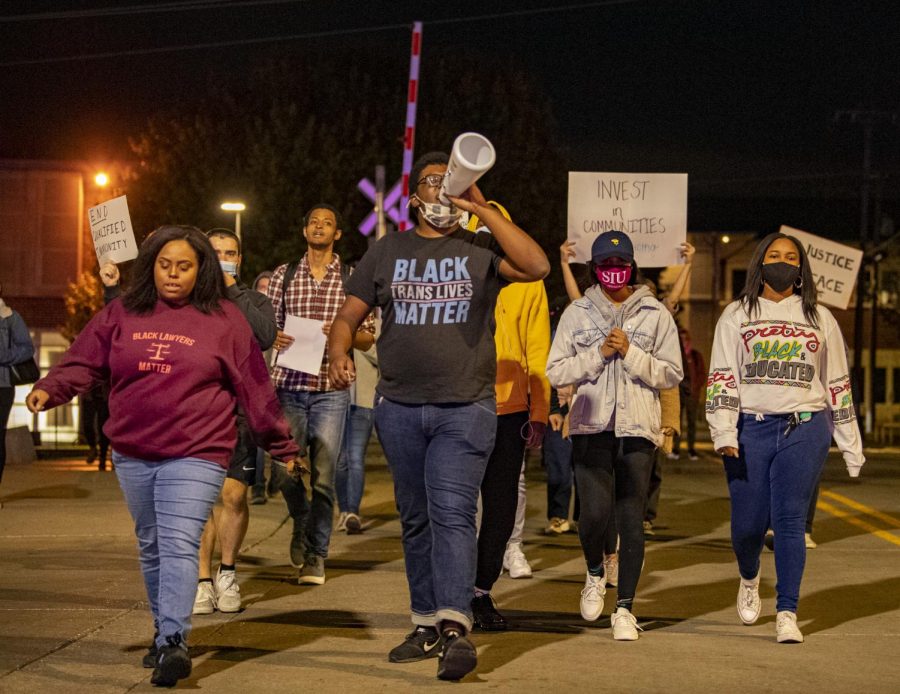 Michael Coleman and Jerricha Griffin lead the protesters around downtown Carbondale on Friday, Oct. 2, 2020, in Carbondale, IL. Around thirty people showed up at the Justice for Breonna Taylor event. Breonna Taylor, Louisville, KY., was killed by the Louisville Metro Police Department officers as the result of a 'no-knock warrant'. Recently the grand jury decided that the police would not receive any charges for the death of Breonna Taylor.

Demonstrators gathered on Friday for the “Justice for Breonna Taylor” protest at the Carbondale Police Department.

Local businesses donated gift cards, gift certificates and art to be raffled off during the event. All the proceeds from the raffle tickets will be donated to the Louisville Bail Out Fund.

Coleman said he has acted as a median between the city and the public, pushing for systematic change and prompting discussions concerning institutionalized racism in Carbondale and all over the United States.

“I am here today because Black women deserve more, period. They do not receive the justice and ramifications that they deserve,” Coleman said. “I want to educate the community to let them know that Black women are mistreated on all levels and we have to do better for them.”

Following the march, Coleman introduced four different speakers who expressed their feelings about social justice, Breonna Taylor and their experience as Black people and as Black women.

Camille Davidson, dean of the SIU Law School, came to speak in support of her students and community.

“I say to my students, you should find your passion, follow it and be zealous advocates, and tonight they are here with respect for the death of Breonna Taylor and asking for justice,” Davidson said.

Davidson said her experience as a Black woman and the grand jury’s decision in Taylor’s case only made her want to fight harder for racial equality.

As a lawyer, Davidson said she hopes to see a system that protects all Americans.

“I’d like to see a system where we are not so quick to criminalize everything. I believe there are many situations when the police are called and they shouldn’t be. I want a system that helps people before we punish them,” Davidson said.

Dan Asonye, a second year law student at SIU, was a speaker at the event advocating for the importance of voting and police reform.

“We’re here to create awareness for Breonna Taylor, for young people to get themselves involved and engage in the political process because it’s our duty,” Asonye said.

Asonye then spoke on police reform.

“I hope to see the end of qualified immunity. This immunity gives the police a lot of protection and leeway. As we have seen, there are cases where immunity allows officers to get away with murder,”  Asonye said.

Kaschia Houston is a junior at SIU studying psychology and political science, and minoring in sociology.

According to Coleman, Houston spoke at prior protests for Breonna Taylor and was asked to speak again Friday evening.

Houston said the event was an opportunity to shed light on Black women’s voices, plights and struggles.

“We are at the frontline of protests but we are a footnote in history. We deserve to live in a world that doesn’t hate us because we have the audacity to exist,” Houston said.

In regards to police reform, Houston said she considers herself an abolitionist.

“The police system needs to be dismantled and rebuilt but as of right now, I am just hoping it can be defunded,” Houston said.

Griffin said she agrees with Houston’s sentiment that Black women are often ignored by the social justice movement.

Griffin said she often feels fearful in encounters with the police.

“Black is power and womanhood is power. It is because of that power that we are chained by society. They are afraid of us,” Griffin said.

“America is the husband that beats us physically then breaks us down mentally and when those two things don’t work, America kills us. We are divorcing ourselves from this country and this system,” Griffin said.

The event ended with a raffle and closing statements by Coleman.

“We are all one community; we cannot progress as a community unless we all recognize the issues within our community,” Coleman said.