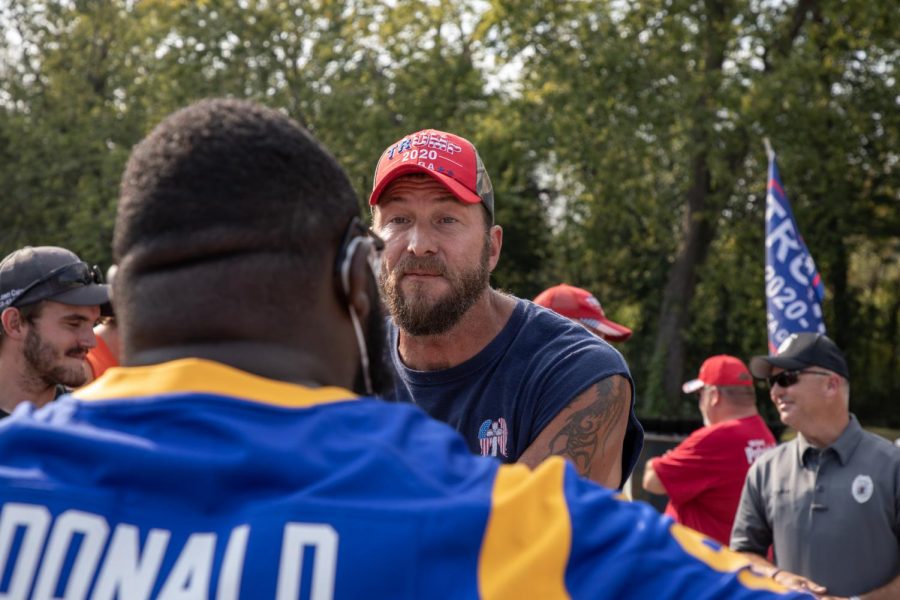 Jeff Messemore an anti-protester speaks to Ayo Oyetunji, a Black Lives Matter protestor about his reasons for not supporting the BLM movement during the Vienna Rally for Racial Justice on Sunday, Sept. 2020.

A group of students at Vienna High School created a Snapchat group titled “We hate Black people” which led one mother to take action.

The group was reported to the school but was quickly deleted, as of now no students have been officially linked to its creation.

(See more: Rally in Vienna: Protesters plan to march in support of BLM after a racist social media incident).

When residents of Vienna discovered plans for the protest they began organizing a counter-protest in response.

Around 70 counter-protestors attended the rally and flew Trump 2020 and confederate flags from their vehicles.

“The BLM movement seems to be nothing but violence. Look at every city they’ve been to. That’s why we’re here,” Jeff Messemore, a counter-protester, said. “If they want to peacefully protest I applaud that. Share your voice, don’t share damage cause we won’t accept that here.”

Several counter-protesters joined with Black lives matter demonstrators at the beginning of the rally for a prayer recited by Darrell Wimberly, 59, Dean of Students at Marion High School and Pastor of East Liberty Christian Church.

“I hope that people will open their eyes and open their hearts up and see we’re all in this together,” Wimberly said.

Lasley said she started planning this rally with the Unity Coalition because of the racism in Vienna High School.

“I have a son who is a freshman at the high school and he is biracial,” Lasley said. “I never want him to feel like he is judged by anybody solely on the color of his skin.”

Lasley said she feels that with the racial tensions in the United States it would be good for the community to come together to show support for minorities and Black Vienna residents.

Kenji Waddy said he does not want this to happen to anyone else.

Waddy said the main thing he deals with in regards to racism at school is micro aggressions.

“I just want parents to educate their kids and have the awkward conversations I’ve had to have with my mom,” Waddy said. “Why shouldn’t you guys?”

“Kids who have been raised in households where diversity is slim to none don’t have to fall into that pattern,” Higgins said.

Victoria Vaughn, a 17 year-old Marion resident and Higgins’ granddaughter said the Black Lives Matter movement has nothing to do with politics.

Vaughn said when she moved schools she endured a culture shock because the majority of the new school students were right.

“I want every race to love and appreciate where they come from without putting others down,” Vaughn said.

Chastity Mays, a 44-year-old Carbondale resident said she fears for her son’s life when he leaves the house.

“This is my life,” she said. “This is what I live with, you don’t know what it’s like to have to be so scared for the lives of your children.”

After the speakers, the protesters began to march around the park and chanting “Black lives matter” and “all lives can’t matter until Black lives do”.

In response, the counter-protestors played loud music and revved their truck engines.

The protesters stopped in front of the counter-protesters and chanted the names of Black people who have been killed by the police, including George Floyd, Breonna Taylor, and Tamir Rice.

The rally escalated into a heated discussion between the protesters and the counter-protesters.

Jones Steve, an 80-year old counter-protester of Vienna, said he’s never seen anything like this rally in the town.

“Black Lives matter and all lives matter, but I don’t know why they’re doing this here,” Jones said.

Chastity Mays said rural towns like Vienna are the heart of America.

“The heart of America is not big cities, the majority of people live in small towns,” Mays said. “That is where we have to make the change.”

Protesters and counter-protesters engaged in multiple discussions that were supervised by the town’s police.

At the end of the rally, State Police officers escorted any protesters who felt it was unsafe to leave on their own.