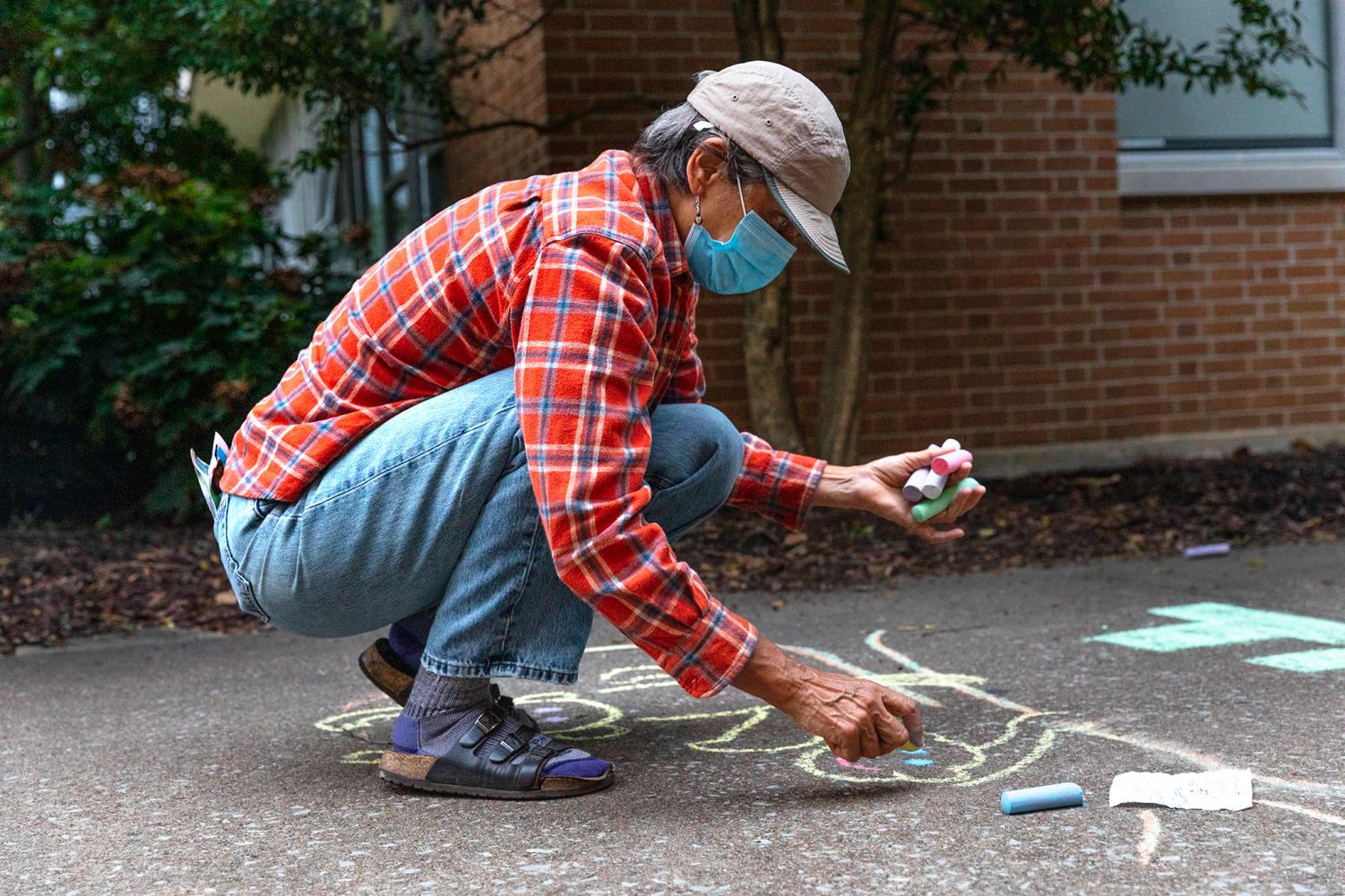 Patty Weyhrich works on the chalk drawing that she prepared to help spread awareness about animal testing Wednesday, Sept. 23, 2020, in Carbondale, Ill. Weyhrich has been involved with the club in previous years and met the student group when they were still Students for the Voiceless at a meeting on factory farms. (Leah Sutton | @leahsuttonphotography)

Patty Weyhrich works on the chalk drawing that she prepared to help spread awareness about animal testing Wednesday, Sept. 23, 2020, in Carbondale, Ill. Weyhrich has been involved with the club in previous years and met the student group when they were still Students for the Voiceless at a meeting on factory farms.

Students Opposing Speciesism (SOS), a student-run organization backed by PETA with hundreds of hubs across the nation, stands in opposition to human supremacy.

SOS has led a few demonstrations with their most recent, a sidewalk-chalking event, on Wednesday, Sept. 23. 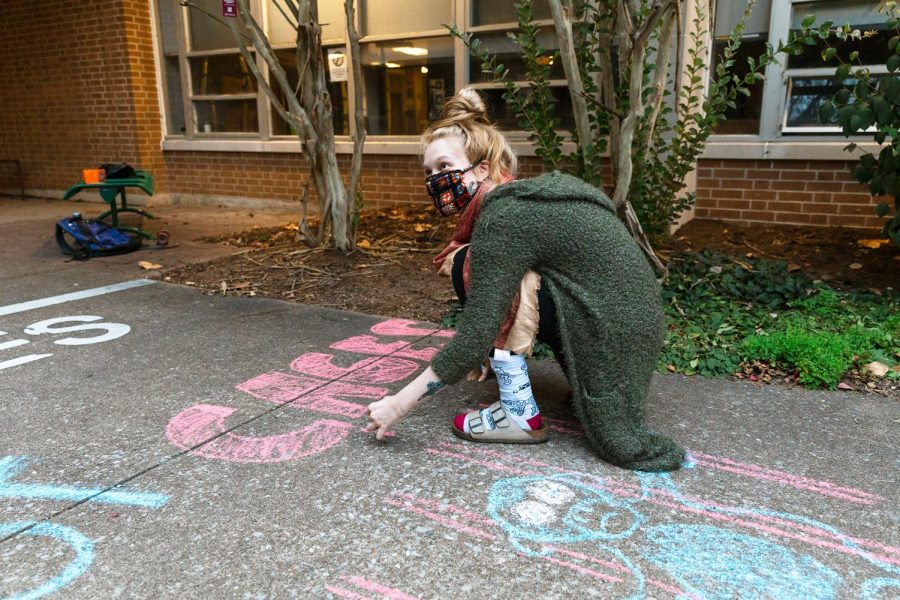 Gallery|4 Photos
Leah Sutton | @leahsuttonphotography
Alyssa Weimer, SIU senior in Art Education, helps with a chalk drawing at the SOS campus chalking event on Wednesday, Sept. 23, 2020, in Carbondale, ILL. Weimer wished that she had found out about Students Opposing Speciesism prior to her last year at SIU.

Prior to August 2020, SIU’s Students Opposing Speciesism hub was formerly known as Students for the Voiceless.

Now that the student group has become a part of the SOS program, they receive funding through PETA.

Reese Borlin, a sophomore in the forestry program at SIU, is the president of Students Opposing Speciesism.

On Sept. 9, the group held an event in the Faner breezeway at SIU to raise awareness on issues concerning animal experimentation.

According to Borlin, these experiments have been going on for nearly 30 years, and in the past 13 years, over $36 million taxpayer dollars have gone to NIH to fund the experiments, which have yielded no results that will help humans.

“They are trying to look at areas of the brain that they believe have a correlation to different neuropsychiatric disorders in humans,” Borlin said. “In these experiments, they are damaging monkeys’ brains by sucking a part of the brain out, burning, or injecting chemicals and then putting monkeys through a series of fright tests where they will be frightened either by slamming doors or props like snakes or spiders and the response is recorded.”

After attempting to contact Elisabeth Murray, NIH forwarded the email to public affairs. When receiving answers about questions related to Murray’s work, they gave answers but warned to not cite or quote NIH staff for the information.

The goal of these experiments is to see how the reactions of the monkeys differ, but the brain lesions left on the monkeys are damaging and different from those of a human who suffers from neuropsychiatric diseases, Borlin said.

Emily Humbert, a doctoral student in the philosophy department at SIU,  has a dissertation that involves nonhuman animal ethics and philosophy.

“If as scientists, they also don’t guide their research in particular directions which would also be bad science as well if they don’t understand that social, psychological, and physical reactions are going to look different in captivity. That is also just bad science to try and simulate reactions from primates as they are immune to social stress and other kinds of external factors kind of takes away the whole point of trying to come up with a cure,” Humbert said in regard to Elisabeth Murray’s animal testing.

Looking at the ethics behind extracting primates from their natural environment, Humbert said the animals being in captivity could skew the results of the research.

If researchers try and simulate anything outside of the experiences that they are used to, “you’re not going to get the same response. If anything, things become kind of exasperated or heightened which would throw off your research,” Humbert said.

Humbert said even though primates could be the closest animal relatives to humans, it is unethical to perform testing on a species that differs from the human anatomy.

“If primates are our closest link in the animal kingdom, there’s this assumption that anything that happens in these experiments is going to be the same for humans. That’s just not the case,” Humbert said. “I think evidence out there is pretty strong to state that you can not compare the same instances of experimentation and response to experiments for nonhuman animals and human animals.”

Humbert said there are better alternatives to conducting the research or ways to find the answers to neuropsychiatric disorders in humans.

Borlin said SOS is calling on NIH to shut down this horrific laboratory, redirect the funds to modern non-animal research methods that benefit humans, and retire the surviving monkeys to sanctuaries.

“I’m unsure when we will hold another demonstration-style event with the current lack of foot traffic on campus. As the weather cools down and the Uggs, boots, and wool sweaters come out, we hope to raise awareness for the cruelty inherent in the animal textile industry, so a future demonstration may deal with this issue,” Borlin said. 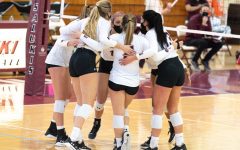 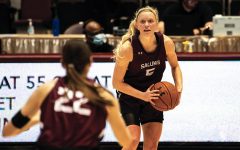 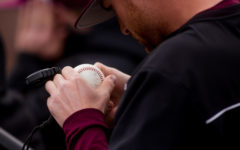 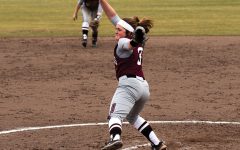 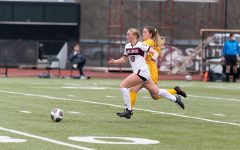 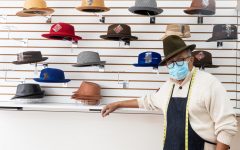 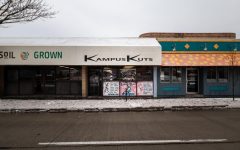 Kampus Kuts: a staple of the Black community 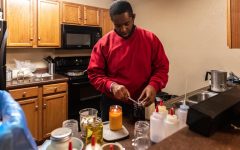 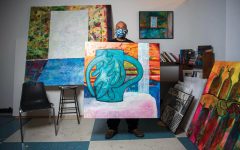 Professor went from prison to prestige through art 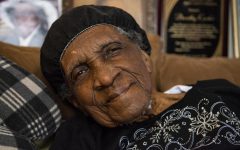