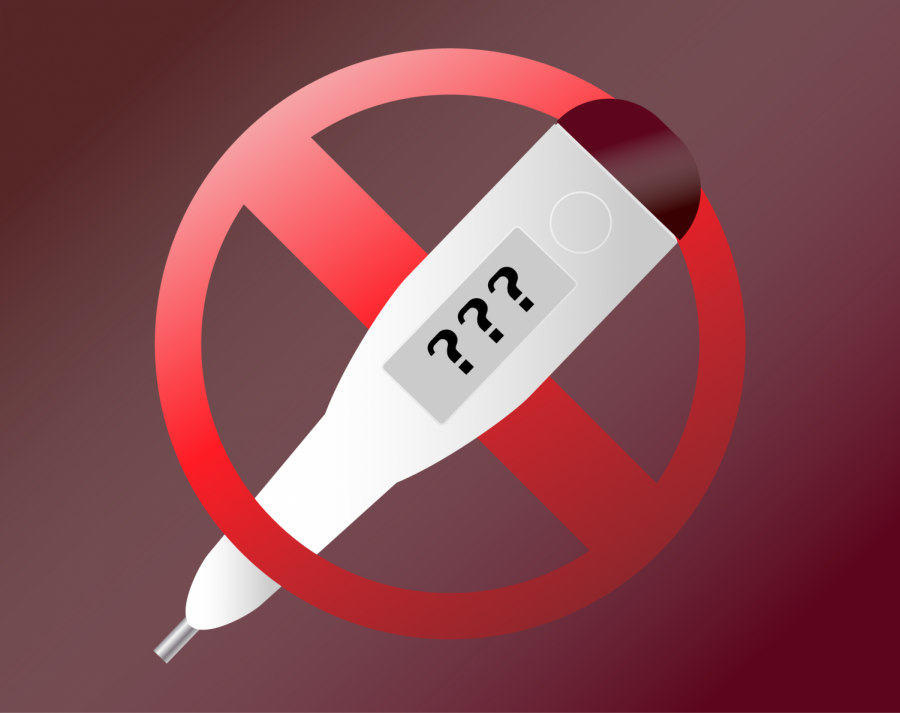 Some on-campus groups and departments have been told they are not permitted to check the temperatures of students because it can cause liability issues for SIU.

According to the minutes of the Aug. 6 MCMA management council meeting, it has been determined that “thermometers will not be used as they represent a potential liability to the University if not used appropriately.”

Matt Baughman, chief of staff in the office of the chancellor, said the university could face liability issues if they allowed temperature checks because it involves the recording of personal health data.

“Details such as the shared use of a thermometer, the cleaning protocols of the thermometer, the potential for a line of people standing too close to each other forming for the temperature checks, an individual’s right to personal privacy and other items would be part of what we take into consideration to mitigate risk to the campus community and the university’s risk and potential liability in establishing an individualized safety plan,” Baughman said.

According to Baughman,  SIU “would have a concern of any individual implementing his or her own independent safety protocols that affect other people in the campus community.”

As the Daily Egyptian was looking into this policy, SIU added a question to their Coronavirus FAQ page about temperature checks on Aug. 27, saying “temperature checks may be implemented in individual units based on an approved safety plan.”

The Daily Egyptian contacted the dean of MCMA, the provost, the chancellor, the Faculty Association, the School of Medicine and the head of the Emergency Operations Committee to ask what the policy is.

SIU’s Chancellor, Austin Lane, said there is no official policy regarding temperatures.

“There is no policy that says areas or departments are not allowed to do it.” Lane said. “What those three areas that are doing it now, they have just gone through the appropriate protocols to ensure they have what they need to do the temperature testing.”

Sam Pavel, the vice president of the Faculty Association, the on-campus union for tenure and tenure track faculty, said he had not heard of any policy regarding temperatures.

“I mean how do they stop you from taking your temperature?” Pavel said. “That doesn’t make a lot of sense.”

Komarraju said she has not heard any requests from faculty to receive permission to test student’s temperatures.

However, some faculty have gone ahead and tested their students without filling out paperwork from the EOC.

Senior fashion design student Jade Cochran said her only in-person class this semester is requiring their temperature to be taken before entering their classroom.

SIU student-trustee Steven Gear said he takes his temperature in his in-person class he teaches as a GA.

The DE’s experience with temperature checks

As part of the DE’s COVID-19 response plan made in July, all workers in the newsroom are required to take their temperature with a contactless thermometer.

“Before clocking in and entering the newsroom, you must take your temperature at the door if a thermometer is available,” the plan reads. ”If it is above 99.9, go home and report to your editor.”

Employees are told to use hand sanitizer and wipe down the thermometer before and after use.

On Friday, Aug. 21, director of the School of Journalism Jan Thompson said she was directed to tell the Daily Egyptian to take all signs down by the Dean of Mass Communication and Media Arts, HD Motyl, because of “liability concerns.”

“The DE was careful to specify that our temperature policy was a newsroom specific one,” Daily Egyptian Editor-in-Chief Kallie Cox said. “We had all of our employees sign forms agreeing to it and we purchased the thermometer with our own money.”

The Daily Egyptian scheduled a Zoom call with Motyl later, who explained he was unsure about the procedure but recalled a meeting with all the deans of the colleges that forbade taking temperatures. He could not find a written policy about taking temperatures.

Motyl called again later that night to explain that the DE would have to fill out the form created by the university’s Emergency Operations Committee.

The Emergency Operations Committee is a college-wide committee of experts, including medical and legal experts, to respond to any campus emergency. The EOC is led by SIU Police Chief Ben Newman.

Newman said he would work with the DE on completing this form. However, the form appears to only pertain to events.

The three organizations on SIU’s campus that are currently requiring temperature checks are the student health center, Saluki Athletics, and the dental hygiene clinic, according to Newman.

According to Newman, the idea that SIU will not perform temperature checks came from Dr. Jerry Kruse, the provost and dean of the SIU School of Medicine.

In an article in March, Kruse wrote, “People infected with Coronavirus can spread the infection before they have symptoms.  It now appears that up to 80% of transmission occurs from asymptomatic individuals before they have fever.”

Kruse said in an interview with the Daily Egyptian that he believes symptom checks are not a priority compared to wearing a mask properly or spending time outdoors.

“The CDC says screening employees is an optional strategy that employers may use,” Kruse said. “I think that’s perfectly stated: optional.”

After fully explaining the DE’s temperature policy, Kruse said the way it was implemented was acceptable and “could be useful” for stopping the transmission of COVID-19.

“I can’t criticize someone for measuring body temperature in the context of a full symptom screening program,” Kruse said.

Despite having yet to receive allowance from the EOC, the Daily Egyptian has continued to  take employee’s temperatures and monitoring symptoms.

“The university encourages students to self-monitor their symptoms,”  Cox said. “Most students do not have a thermometer and most other locations and classes on campus are not taking temps, the thermometer in the newsroom may be the only way our employees can monitor themselves.”