Technical difficulties: Lack of internet puts some students at a disadvantage 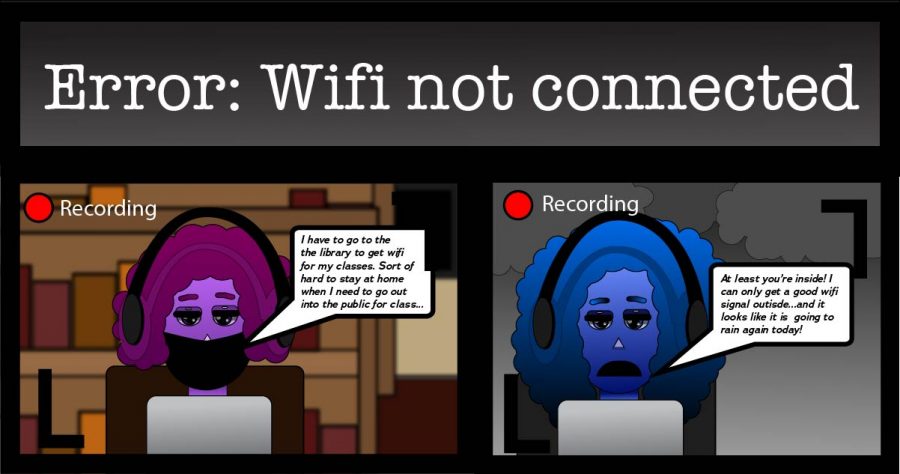 The switch to online classes has left some SIU students at a technological disadvantage.

These students are typically directed to seek assistance through Saluki Cares, a program through the SIU Dean of Students office that helps students with a variety of issues.

Students can apply for technology assistance in the form of laptops, webcams or mobile hotspots, although students who live in Carbondale are unable to receive mobile hotspots.

This means students without internet access who live in Carbondale have to come to campus or find another alternative to be able to complete their online coursework.

Sienna Walaszek, a senior studying philosophy, does not have internet access at home and has been walking to campus to participate in online classes and do homework.

“I made some calls and I told them, yeah, I don’t have WiFi, I live over a mile from campus,” Walaszek said.

Walaszek said she was told the university had wireless hotspots, but they were only being given to students living in other towns, which meant she was ineligible.

Jennifer Jones-Hall, SIU’s Dean of Students, said students who live in Carbondale are not able to receive a mobile hotspot through Saluki Cares because they are able to come to campus.

“There’s many computer labs on campus so we really are looking at students to say you really are not in need of the mobile hotspot if you are living very close to campus and have the ability to come on to campus,” Jones-Hall said.

Jones-Hall said the office has a limited number of mobile hotspots, and they are providing them to students living at home, mostly for those living in very rural areas where getting WiFi is difficult.

“We have very few because they’re very hard to come by, and they are very costly,” Jones-Hall said. “From a university perspective, [we also] need to utilize our resources in the best avenue possible.”

Saluki Cares doesn’t receive funding from the state, but rather through donations to the SIU Foundation, Jones-Hall said.

Walaszek said she received a call from John Massie from the Dean of Students office, and he gave her different places to go to access campus WiFi.

“[He] kind of explained the situation and said that I can go to the Rec Center and sit in there and do my homework,” Walaszek said. “He said I can go into the hallways in buildings and try to sit somewhere there and use the WiFi.”

Walaszek said she works at the Rec Center and has been told not to let people “just sit around.”

Walaszek said she has gone to friends’ houses to do classwork, but mostly works on campus. She only has one in-person class, which was moved to Touch of Nature.

Walaszek said she tries to work in the library frequently, but isn’t always able to get a spot inside.

“I sit there all day, I can’t really eat or drink things, sometimes [if there aren’t] tables, I’m just sitting on the ground outside,” Walaszek said. “It’s definitely not pleasant to sit there on the concrete so I can be six feet away from other people.”

Elena Cornelius, a senior dual majoring in psychology and social work, said she also has no internet access at home. She reached out to her adviser and the Dean of Students office for help, but was only offered one solution.

“The only solution is to drive to campus and sit on campus,” Cornelius said.

Cornelius said she hasn’t found another option, and she has been driving to campus, a 15- to 20-minute drive each way, to complete her work since the semester began.

Cornelius said she often works from her car, but has been “chased out” of parking lots by campus police because it looked like she was loitering.

“I was parked in a red lot where my red sticker is, but since I’d just been sitting there in my car with it running so long, they’re like, ‘We’d prefer if you move on,’” Cornelius said. “It’s fantastic. It’s completely horrible.”

Cornelius said she has also sat in hallways to work, but has been asked to leave by professors teaching across the hall because it’s a distraction to their class.

Cornelius said it’s difficult to find a spot in the library and the hours don’t always work with her schedule, and on most days she spends the entire day sitting outside on campus to do schoolwork.

“By the time I’m done with my classes for the day, I’ll go home and get dinner and then when it’s time to do homework, it’s seven or eight o’clock at night and I’m having to drive and just sit in a parking lot by myself, doing homework,” Cornelius said. “It’s kind of scary because it doesn’t really feel safe and I don’t really want to do it, but I also don’t want to fail a class.”

Both Cornelius and Walaszek said their internet situations have made it harder for them to do classwork.

Walaszek said she feels like she is doing well in her classes because she always makes sure to get her work done, but said she has been putting more effort just to do homework.

“It’s not like the homework itself, but just to be able to go and do it, I’m definitely putting in more effort than expected,” Walaszek said.

Cornelius said the internet connection on campus isn’t always reliable, and that has caused her issues.

“Sometimes […] it just doesn’t work and I can’t complete assignments and it’s pretty frustrating ‘cause it’s not that I don’t want to do the work, it’s just I don’t have the resources to do it,” Cornelius said.

She has also had the internet cut out in the middle of Zoom lectures.

“I’ve not been allowed back in a class because of class policy of not being able to rejoin after 15 minutes into the class,” Cornelius said.

Emma Lasley, a junior studying music education and German with a sign language minor, has also had issues with classwork due to technology issues.

Lasley has been facing issues with her laptop’s connectivity, particularly when using Zoom. She uses a Chromebook and has found when she tries to talk during classes, it stalls the class.

“By the time I get the audio on, try to talk, then I have to wait 10, 15 seconds [because of] time lag and then teachers don’t even hear what I have to say and it’s taking away from time discussion,” Lasley said. “And then I’m also not getting participation points.”

Lasley said she was unable to submit a technology assistance request through Saluki Cares because due to taking less than 12 credit hours, she is ineligible.

“I just found out that I’m not even eligible for an SIU technology grant, so I just don’t know where to go through the school,” Lasley said.

Lasley said her other professors have not given her direction on what to do and some have complained about her issues.

“I actually had a professor mocking me almost because of my connection issues in class,” Lasley said. “I was trying to answer a question and he couldn’t hear me, and so instead of asking me to repeat, he just screamed out ‘Your connection sucks. It sucks.’”

Lasley said the professor proceeded to make fun of the choppy motions that were coming through.

Lasley said she has tried working from campus in the hopes that campus internet would be faster than her internet at home, but it is a lot of work for her to get there.

“One [hour-long] class takes two hours worth of prep to get everything together, get to campus, and then find an isolated spot,” Lasley said. “It’s especially a struggle since I’m a music student, half of my classes involve me playing an instrument, which I can’t just do anywhere on campus.”

Lasley said she has been trying to find spots within the music department, but spaces are limited and students have to provide their own materials, including music stands and sanitation supplies.

“I’ve found that going to campus, it’s only marginally better in terms of connection,” Lasley said, “and it’s a lot more stress.”

Lasley said she thinks the issues she has experienced will impact her grades.

“Because of my technology limitations, I’m losing out on participation points in some classes because I just can’t speak up during class because my internet won’t allow it,” Lasley said.

She said sometimes Zoom cuts out for a few minutes while she is in class, so she also is losing information.

“I’m definitely worried about my grade, but more so I’m worried about the fact that I’m not getting all of the information that I’m supposed to be getting even though I’m present for the class,” Lasley said.

With the ongoing pandemic, SIU moving classes fully remote this semester, like happened in March, is a possibility.

Jones-Hall said if this situation occurs, some campus buildings will still be open.

“That’s just bullshit, and […] they should have a solution,” Cornelius said. “If they’re going to force you to take online classes, they should have a way to provide that to everyone that doesn’t require spending money on gas, feeling unsafe, things like that.”

Jones-Hall said there has not been concern about having students without internet spending significant amounts of time on campus.

It is possible that any of the students might have to isolate or quarantine at some point, and it’s unclear what the university’s plan would be to accommodate students without internet access if they were in this situation.

“I asked John Massie about this, I told him what if I do get it and then am I still expected to go to campus and he actually told me that is a hypothetical and that we will get there when we get there,” Walaszek said.

Walaszek said it sounded to her like there isn’t a plan for what students without internet access would do if they had to quarantine or isolate.

“It sounds like I still would have to go to campus and utilize the WiFi if I wasn’t just puking or feeling terrible,” Walaszek said.

Cornelius said if she had to stay home, she wouldn’t be able to complete classwork.

“If I had to quarantine at my house for two weeks, there’s no physical way I’d actually be able to complete school,” Cornelius said.

Cornelius said she has in-person classes where the rooms are over max capacity and people aren’t wearing masks properly.

“I have a lot of health issues. Me getting the virus, my doctors have told me, is a death sentence,” Cornelius said. “So it’s terrifying being in a classroom with people who don’t understand wearing a mask and we already can’t be six feet apart and it’s just it’s ridiculous.”

Walaszek said she is sure the university is doing its best to deal with an odd situation with little preparation time.

“I do wish that they were doing more for students now, especially students that don’t have WiFi,” Walaszek said.

Cornelius said a response she would like to see from SIU is establishing enough designated spaces where students can work and access the internet while still being able to social distance, or providing funding so students could pay for an alternative source.

Managing Editor Rana Schenke can be reached at [email protected].