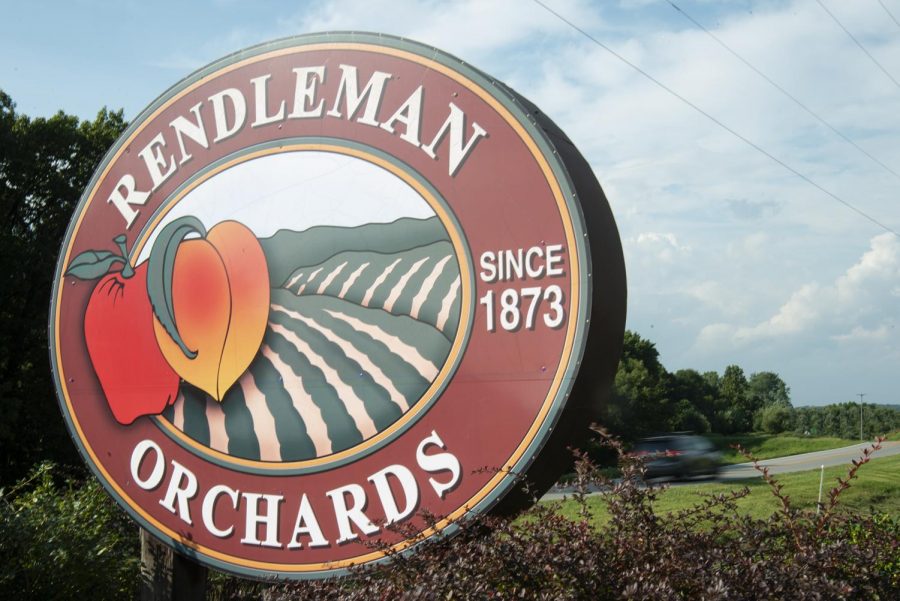 A car passes behind the Rendleman's Orchard sign located on Illinois Route 127 in Alto Pass on Sept. 12. Rendleman's offers flower fields to walk through, goats and chickens to pet and apples for sale through the fall season.

What started in 1873 with 88 acres and a place to raise farm animals, by 1968 had grown to one of the largest peach orchards in the state of Illinois.

John and Isabella Rendleman bought the farm in 1873 and worked it with their son Grover Rendleman.

Grover and his son Jimmy formed Grover Rendleman and Son in the late 1930s and they began selling peaches.

Now Rendleman Orchards has expanded in their production offerings and have included many seasonal events to the farm.

Driving up to the orchard, the first thing you see are people entering and leaving the Farm Market with handfuls of fruits and flowers.

The wildflower field is filled with yellow, red, pink and orange zinnias that you can handpick and take home with you and later this fall, these will be replaced with sunflowers.

Wayne and Michelle Sirles are now the primary leadership of the farm.

Wayne and Michelle are the third generation of Saluki Sweethearts, couples that meet at SIU, in the Rendleman family.

One of Rendleman’s main attractions during the Fall season is its field of flowers. People come from all over the Carbondale area to pick the flowers with their families and  take a picture.

Another orchard attendee, Justin Craft, said that he came to Rendleman Orchards to pick flowers and drink peach smoothies with his family.

Sky Bartnick, who has been working at Rendleman Orchards for three weeks, said that the friendly work environment makes this a great place to work.

“My favorite part about working here is definitely all the people I get to meet and the friendly work environment. I have one of the best managers ever, I love Michelle,” Bartnick said.

The Fall season will usher in more family-friendly events.

“We have a big fall coming up; fall is our busiest time of the year. We have all kinds of great photo ops that we’re planning,” said Michelle Sirles.

Sunflower season, which will be in mid-to-late September, is one of the many fall attractions.

“This year we’ve added a couple of varieties [of sunflower] and one of them is a mammoth giant. We have the traditional sunflowers and teddy bear, which is a dwarf sunflower with a really unique bloom,” Sirles said.

A gourd tunnel will also be added as the entrance to the sunflower field. The orchard will also have a U-pick pumpkin patch and they will have apple cider donuts and slushies available for the fall season.

The U-pick pumpkin patch will be open on the last weekend of September through Halloween and it is pay per pound.

“We created more social distancing in the store […] masks are required. We also offer hand sanitizer at every check out station, we have all of our own team wearing masks and we have handwashing stations at all the entrances,” said Sirles.

They also hired Bartnick to help control the number of people that enter the Farm Market.

“We’ve hired an extra high school person on Saturdays and Sundays, and she helps us control the number of people in the store at one time, [she] greets the customer and lets them know that we require masks,” Sirles said.

A carport was opened outside of the Farm Market, so if people did not want to enter the market, they can still buy flowers, peaches and apples, Sirles said.

“I was actually hired because of COVID, I count how many people go in [the market] and I make sure that everybody is wearing their masks,” Bartnick said.