‘We want more togetherness and unity:’ Carbondale honors 57th Anniversary of The March on Washington

“We're still dealing with a lot. Police are still harassing a lot of the community and we want that to stop” 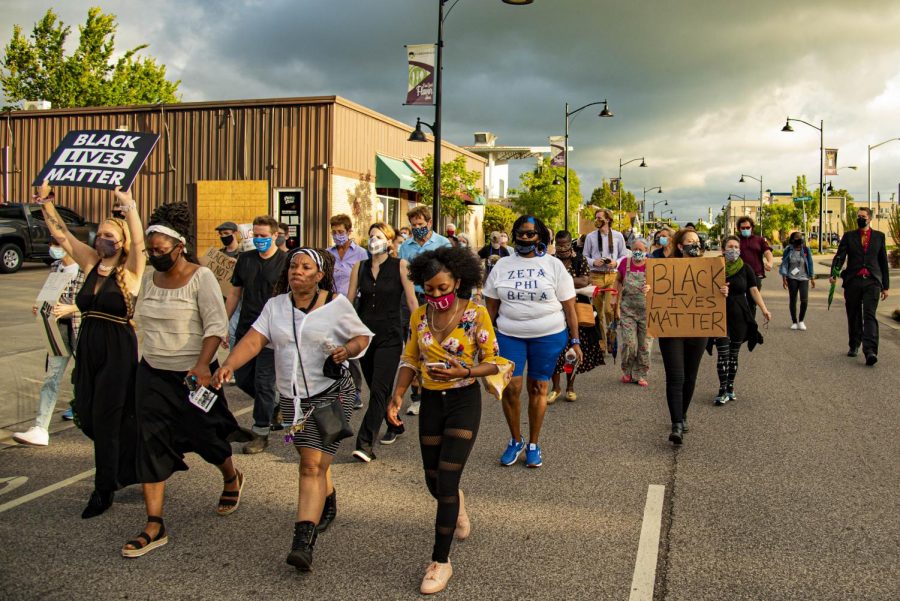 Protesters gathered on Aug. 28 at Attucks Park to commemorate the 57th anniversary of The March on Washington.

On this date in 1963, Dr. Martin Luther King Jr. gave his famous I Have a Dream speech.

The purpose of this march was to advocate for the civil rights of those in the Black community.

Over 250,000 people attended the march 57 years ago, making it the largest demonstration for human rights that had taken place in United States history.

About 60 demonstrators came out to commemorate this historical event.

Nancy Maxwell, organizer of the march and founder of  So. Ill. Unity Coalition, wanted to have this event to bring people together and bring change to the community.

“People are marching all over the world. We want to march too. We’ve got to fix where we live before we can fix somewhere else, so we have to keep continuing on marching and protesting to get southern Illinois straight,” Maxwell said.

Maxwell also wanted to acknowledge that not much has changed over the last 57 years as she said the same issues from the past have returned but in a different disguise.

“We are working hard to make that dream a reality but there are still many changes that need to be made,”  Maxwell said.

Speaker Caleb Bonsey said the words from Dr. King are still true to this day and that one day we will rise and see the change in our future.

Community activists and organizers Emerald Averil and Matt Wilson said their goal is to bring change and cooperation to the community.

“We’re still dealing with a lot. Police are still harassing a lot of the community and we want that to stop,” Wilson said. “We want more togetherness and unity.”

Averil also spoke at this event and read the famous speech by civil rights leader John Lewis who recently passed away. Lewis was the youngest person at the original March on Washington to give a speech at 23-years-old.

During her speech Averil said the phrase “Black Lives Matter” is seen as just a phrase to businesses, police departments and the government and that needs to change immediately.

In Averils closing of the speech she used Lewis’s famous line, “Wake up, America! Wake up! For we cannot stop, and we will not and cannot be patient.”

Catherine Mitchell, 56, of Carbondale, said that she attended the event to,  “right the wrongs of our people.” She also said she attended because of her sons.

“I got three of them, and I’m worried about them,” Mitchell said.

This event happened the same week as nationwide outrage was rekindled in the recent shooting of Jacob Blake in Kenosha, Wis. Local police shot Blake seven times in the back.

Defense attorney and candidate for Jackson County state’s attorney, Joe Cervantes, said he has been fighting injustices in the courtroom since he was in law school and that these protests are just awareness of what has always been happening.

“I came from Chicago a long time ago. I came down in 1996 and I was a juvenile in the system before I joined the military, but today I came here to share my story and show we can change the narrative,” Cervantes said.

“It would be a real shame if you [stand] by watching all this happen and you knew it was wrong and didn’t take part in it and didn’t try to change things,” freshman forestry major Sophia Maring said.

Joseph Albin, an attendee who said he often participates in local protests, said people need to keep fighting for change.

“I feel like there has been a foot stepping off the gas and we have to keep fighting because I believe we can win,” Albin said.