The Daily Egyptian • May 6, 2020 • https://dailyegyptian.com/101152/news/social-media-fundraiser-generates-over-10k-for-local-business-rainbow-ranch/ 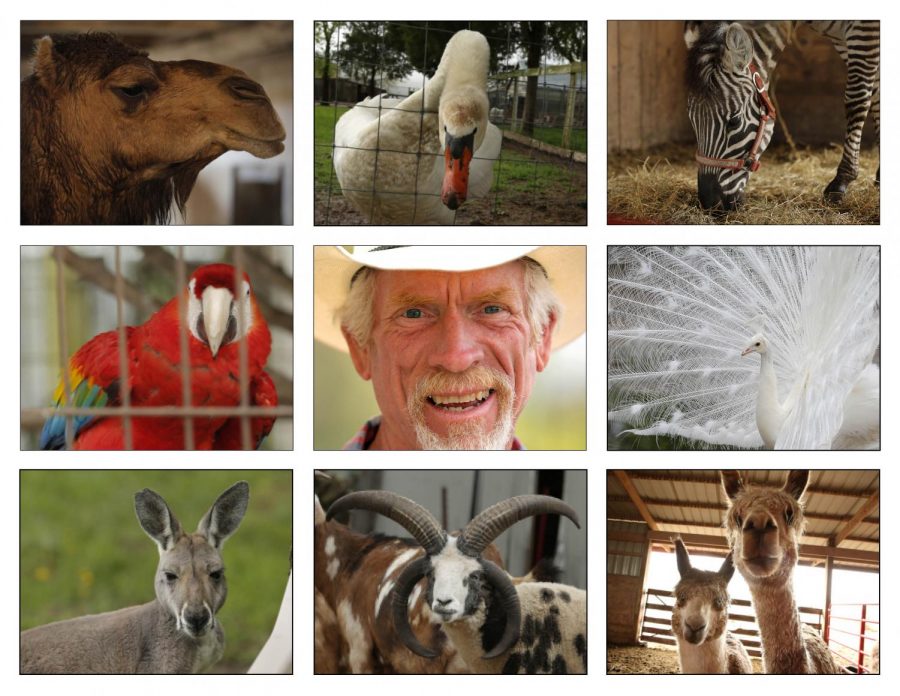 Alan Blumhorst, 60, is the owner of the Rainbow Ranch Petting Zoo, located on a 170-year-old, family-owned farm in Nashville, IL, and home to as many as 30-35 different species of exotic and traditional farm animals, totaling about 220 animals before mating season, and anywhere from 300-400 after the babies are born. Animals, clockwise from top-left: Candy the Camel; a swan; Ziggy the Zebra; a white peacock; alpacas; Big Jake the Jacob Sheep; Skippy the Kangaroo; and Max the Macaw. Blumhorst uses alliteration when naming the animals on his farm because it helps the kids remember the animals.

In the midst of the global COVID-19 pandemic, Rainbow Ranch Petting Zoo owner Alan Blumhorst wasn’t sure how his business was going to come up with the funds they needed to cover animal feed and veterinarian bill costs.

After turning to Facebook to host a fundraiser, the ranch, located in Nashville, Illinois, was able to raise over $10,000 — twice the amount they had hoped for — to help cover the necessary expenses.

Blumhorst opened Rainbow Ranch in 2002 on his 170-year-old family farm after having collected animals for around 10 years, and has since grown both the business as well as the collection of animals it provides a home for.

When businesses started to close in March to help prevent further spread of COVID-19, Blumhorst wasn’t able to open Rainbow Ranch on April 1 like he normally had done in previous years, and his travelling zoo events were also cancelled as social distancing orders went into effect.

Without a source of revenue, Blumhorst said he wasn’t sure how he was going to afford paying for feed and veterinarian bills for the animals at the farm, but he estimated he would need around $5,000.

“I had no idea how I was going to come up with 5 grand. I lost, [in] the month of April, I lost probably 15 grand in revenue, because that’s our best month – school field trips and then the travelling zoos for Easter, [when] we go to nursing homes with their Easter egg hunts,” Blumhorst said. “That first weekend, everybody cancelled and I was just sick because […] there went anywhere from 12 to 15 grand.”

Unlike many other small businesses, Blumhorst said the ranch couldn’t qualify for federal aid (such as that from the CARES Act) because his employees, which are primarily high school and college students, are not full-time employees, but rather part-time agricultural ones.

“This operation is so small, during the year we’ll have like 3-4 tour guides helping out, but otherwise you have the day-to-day stuff, and that’s me,” Blumhorst said. “I’m lucky that I’ve got some help [and] that the kids are still coming.”

One of Blumhorst’s employees that has continued working on the ranch during the pandemic is University of Illinois-Springfield student Taylor Potrawski, who has volunteered or worked at the ranch for around three years.

Potrawski, who helps with giving tours, feeding animals and completing small projects around the farm, was the one who planted the idea of conducting an online fundraiser to help cover the animal bills.

“I have worked at a job previously at a therapy riding center where I had done a bunch of fundraisers for them so I kind of knew how to do it, and I just thought it would be a good idea to do a Facebook fundraiser for him,” Potrawski said.

Potrawski said Blumhorst was hesitant about the idea of fundraising at first.

“At first it was [difficult to convince Blumhorst because] he was really hesitant and he didn’t want to put his hand out, but I think as he realized that this wasn’t going to end as quickly as we had all hoped, that he was kind of more willing to ask for help,” Potrawski said.

They started their fundraising efforts by taking to their Facebook page, and on April 15 they had posted a fundraiser on the platform with a $5,000 goal, expecting it to take around a month to raise the amount needed, Blumhorst said.

Instead of taking that long, though, Potrawski said they saw the funds come in overnight.

Blumhorst was surprised at how quickly word of his fundraiser had spread across Facebook.

“We’ve been on Facebook and we’ve had a few posts and stuff […reach around] 10,15, to 20,000 people, but this just floored me how quickly it took off and how everybody shared and wanted to pitch in,” Blumhorst said.

In addition to hosting the fundraiser on Facebook, which brought in a total of $8,495, Blumhorst said they also opened a Venmo account to accept donations, and have also received personal checks in the mail – all of which totals over $10,000.

“The total is over $10,000 because we included a Venmo account […] in case people didn’t want to donate through Facebook. So they set up a Venmo account and [that received] over $1,000, and then people are sending me checks in the mail, and we’re still getting them,” Blumhorst said.

Blumhorst said in addition to monetary contributions, the ranch has also received help on paying feed bills from his suppliers and has received individual donations of animal feed as well.

“[One person] anonymously found out where I got my feed and brought in $300 to pay on my feed bill,” Blumhorst said. “[And, another] lady that had been here last year, she drove over two hours from Decatur, Illinois, with a pickup full of food. She went to her local [farm supply store] and bought cracked corn, and oats and dog biscuits and all kinds of goodies for the ranch.”

Blumhorst said in the month of May his business plans to continue raising funds online by partnering with another local business in selling Rainbow Ranch t-shirts.

In the meantime, without yet being able to open the business, Blumhorst has provided updates on the animals of the ranch with photos and videos on Facebook and Youtube, which they started uploading to at the beginning of the pandemic.

“[We have been] trying to keep current with the teachers, and I let the school groups that cancelled their field trips know, ‘Hey tell the kids to go to Youtube and then they can see […] tours and see the new babies,’” Blumhorst said.

Staff writer Brooke Buerck can be reached at [email protected] or on Twitter at @bbuerck25.