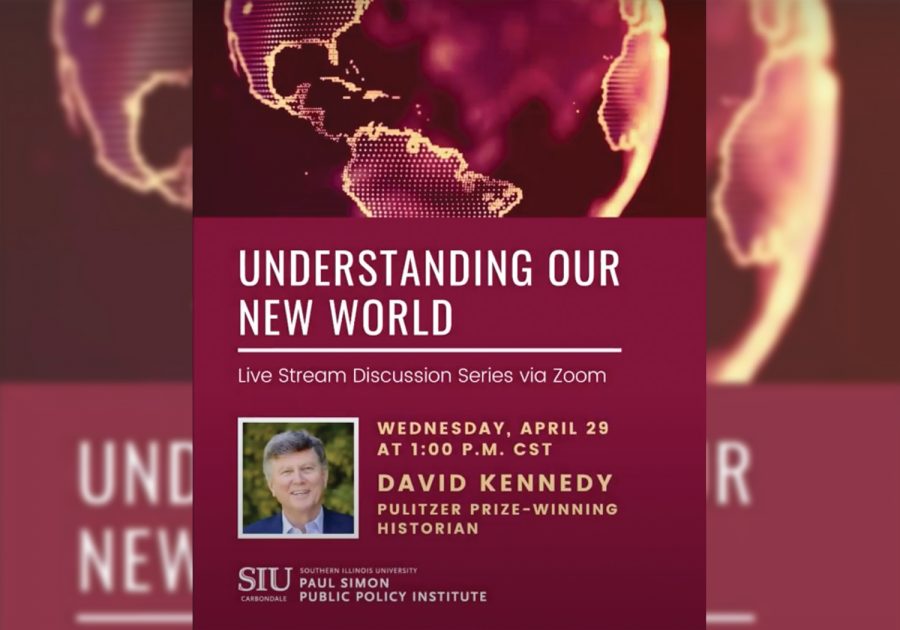 David Kennedy, a Pulitzer Prize winning historian, documentarian and professor emeritus at Stanford University, spoke to listeners about how the coronavirus highlights the positives and the negatives of the government at a virtual question and answer session held April 29.

“This crisis tells us something about the price we pay for the highly disarticulated federalist and federal system that we have. And again, to repeat what I said earlier, it has many virtues. And there are many aspects about it that we have a right to be proud of, but it has some problems and liabilities as well.”

At the question and answer session, hosted by the Paul Simon Public Policy Institute and moderated by institute director John Shaw, Kennedy put the coronavirus in perspective to other crises in American history. Over 150 people signed in to the public livestream.

Kennedy said this crisis has been focused on the actions of the state’s governments; however, he thinks the federal response to coronavirus came up short.

“The motto of the Coast Guard in this country is sempre paratus, always ready in Latin. Well, that’s what government should be for, is to see through possible calamities and brace for it on both feet,” Kennedy said. “You cannot describe the American federal government’s response to this crisis that way so far.”

Compared to other crises, Kennedy calls the speed of effect of unemployment during COVID-19 quite unusual.

Kennedy noted that the last global economic crisis was the Great Depression in the 1930s.

The president during the Great Depression, Franklin D. Roosevelt, gave “fireside chats” over the radio to communicate to the American public and reassure them with clear language about his policies. Kennedy noted the difference in tone between these and President Trump’s daily coronavirus briefings.

“Roosevelt was reassuring and debunkular and calm and cool and factual and did not go beyond his competence in the things that he was advising,” Kennedy said. “You just wouldn’t use those forms of description from federal leadership lately.”

After the Great Depression and World War II, the United States emerged as a political  economic leader in countries, and was the architect of many global institutions like the United Nations and the World Trade Organization. Moving forward, Kennedy isn’t sure if the United States will have the same role as after the pandemic passes.

“We no longer have the relative power in the world that we did in 1945. We no longer stand alone at the summit of the world. The Chinese are right there next to us to take one example. But that whole ethos of trying to build institutional, real concrete platforms for international collaboration to address problems that are common to all humanity is a distinctive American approach. And I just really, really get nervous, but I think we’re going to reject it.”

After COVID-19, climate change is another crisis that will affect the world, Kennedy said.

“Climate change is something that no single jurisdiction can really effectively cope with. And there has to be cross border cooperation, international cooperation, if we’re ever going to save the planet from heating up beyond the point where it becomes habitable,” Kennedy said.

Kennedy also said the combination of fragmentation of mass media, confirmation bias, and people who maliciously manipulate the truth in the media will lead to less productive discussions.

Shaw asked Kennedy near the end how he would frame this period in history if he were to write about it in a history book, as he is one of the editors of the popular US History textbook “The American Pageant” since the original author’s death in 1983.

Kennedy said it’s hard to write history while it is happening, as more information is still being gathered about the virus, but is optimistic that this will lead to a resurgence to a competent central government.

The entire lecture has been uploaded on the institute’s YouTube page. The next scheduled livestream with the Paul Simon Public Policy Institute is May 14 at 10 a.m. with Swedish diplomat Jan Eliasson.

Guest contributor Danny Connolly is the assignments editor for River Region Evening Edition and can be reached on Twitter at @DConnollyTV.