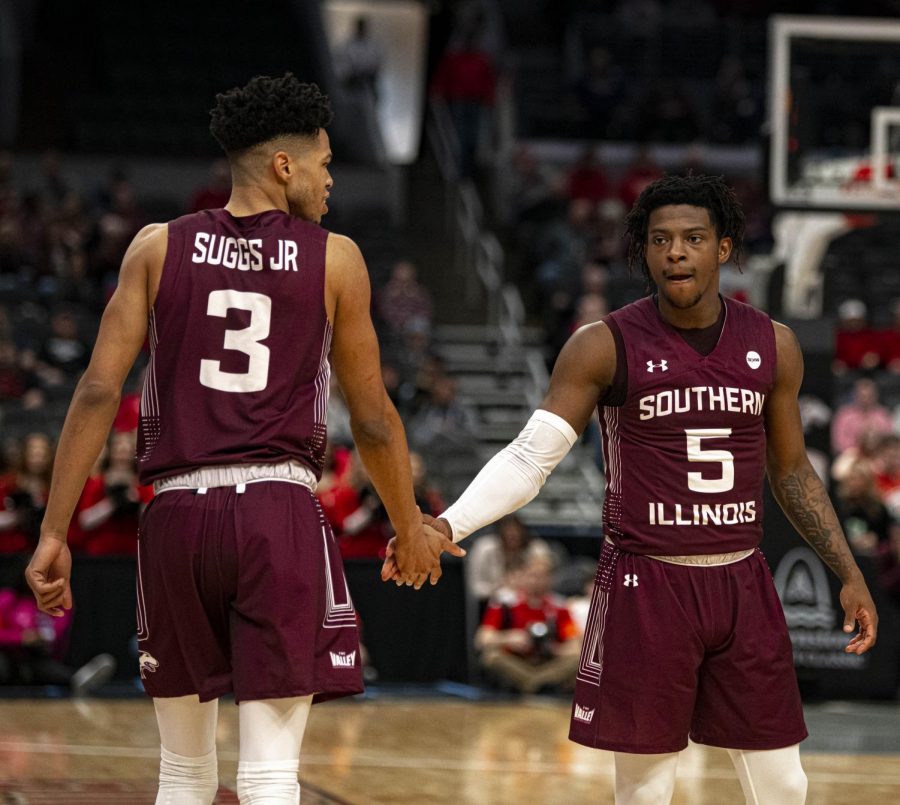 Ronnie Suggs Jr. (left) shows support for Lance Jones (right) against Bradley as the Salukis would go onto lose 59-64 to Bradley on Friday, Mar. 6, 2020 at the Enterprise Center in St. Louis, MO.

A three-point conversion play from Bradley was the dagger that ended SIU’s 2019-2020 season.

The Salukis held a commanding lead over the Braves coming out of the halftime break, but the offensive efforts from the Peoria team in the final minutes of the game proved to be detrimental to Southern allowing Bradley to steal the lead and take the win, 64-59.

“Give credit to Bradley. They made a couple of big plays at the end and made one more basket than us,” Saluki head coach Bryan Mullins said. “I’m incredibly proud of how we competed today and how we’ve competed all year. This group of guys has represented the university extremely well on and off the court.”

Freshman guard Lance Jones kept SIU afloat in the second half and led them in scoring on the night with 20 points. He was joined in double digit scoring by senior guard Eric McGill who was one rebound short of a double-double performance with 10 points and nine boards.

“I want to give credit to my teammates,” Jones said. “They got me the ball in the right positions. I just want to try and make a play off of that.”

For Bradley, senior guard Darrell Brown led the way with 19 points and his teammates, junior forward Elijah Childs and freshman guard Ville Tahvanainen trailed him with 16 and 12 points respectively.

The Braves swept Southern in regular season conference play with two previous wins and the win tonight gave them a 3-0 record against the Salukis on the season.

“That was a great basketball game,” Bradley head coach Brian Wardle said. “I thought [the] two teams [were] laying it all out there…We couldn’t get going offensively, but defense and rebounding keeps you in the game. That’s what March is all about; survive and advance.”

Bradley was the first to score after the tip, with a short jumper at the free throw line from senior center Koch Bar. The Braves scored two more unanswered baskets to take an early 5-0 lead over the Salukis.

During this time, Southern struggled to find a rhythm on offense remaining scoreless for the first four minutes of the game.

A three-point jumper from Jones followed by a floater in the lane from graduate student center Barret Benson put SIU on the board and tied the game 5-5.

From here, Southern took the lead scoring two consecutive baskets with one being a 3-pointer from junior forward Brendon Gooch.

The Salukis continued to extend their lead with two layups from Jones, but the Braves proceeded to attack the SIU defense to cut the deficit down to three at 14-11.

The teams battled closely for the lead shooting back-to-back 3-pointers, but it was Southern that emerged with a three-point advantage at 27-24 as the half came to a close.

Jones led the Salukis in scoring at halftime with 12 points, while Childs led for Bradley with 10.

Southern Illinois kept their energy entering the second half with two back-to-back layups to open scoring on both ends. The layups lengthened SIU’s lead 31-24.

The Braves responded with two baskets of their own from Childs and Brown, but the Salukis appeared to be unaffected as they went on to score back-to-back 3-pointers on the next two possessions.

The 3-pointers from graduate student guard Ronnie Suggs Jr. and freshman forward Marcus Domask pushed the score to 37-28. On the following two possessions, Bradley responded with two 3-pointers of their own to cut the Southern lead down to four.

A 4-1 scoring run for the Braves, led by Brown, allowed Bradley to take the lead for the first time since the beginning of the first half, 47-46.

In the remaining minutes of the half, there were several ties and lead changes among the two teams with the highest scoring difference being just three-points.

In the final 30 seconds of the game, a foul called on Suggs allowed the Braves to score on a three-point play and take the lead 62-59. After this play, the Salukis were unable to recover the lead and a pair of Bradley free throws from Brown secured the 59-64 SIU defeat.

Bradley’s win this evening will send the team to play in the semi-finals tomorrow to take on the Drake University Bulldogs.

After falling in tonight’s matchup, the SIU season has ended and the Salukis will not see action until next fall.

“[We] definitely aren’t satisfied,” Mullins said. “I thought we had a group in that locker room that was capable of playing here on Sunday. That was our goal throughout the whole season. Moving forward, we’ve just got to continue to get our young guys better and continue to add pieces.”