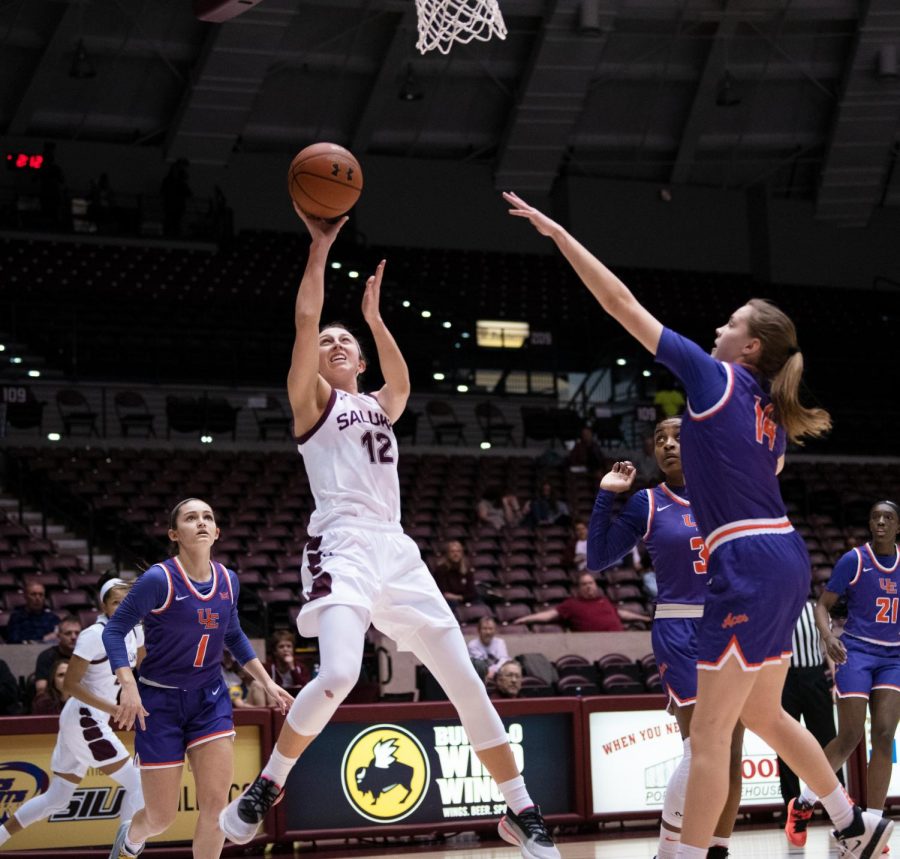 Southern Illinois Saluki number 12 guard, Makenzie Silvey, goes for a basket during the Sunday afternoon game against the Evansville Purple Aces. The game ended 99 to 60 with SIU taking the win on February 23, 2020 at the SIU Banterra Center.

Southern took their second loss on the road this week after suffering a 66-56 loss to Illinois State this evening.

The teams were neck-and-neck to begin with, but the Redbirds pulled away late in the second half and SIU was unable to recover.

Illinois State (16-10 MVC 8-7) has given strong performances on its home court all season, winning 12-of-15 games and this continued today.

Junior guard Paige Saylor led ISU in scoring with 14 points. Not far behind her was junior guard Juliunn Redmond with 13 points.

The top performer for the Salukis was senior guard Brittney Patrick, who notched 17 points and six rebounds.

Junior forward Abby Brockmeyer put up a points-rebounds double-double with 11 points and 12 boards.

Fouling was also a problem for SIU with one of its players fouling out and two others with four.

Senior forward Nicole Martin started for the Salukis scoring with a layup on a fast break that was assisted by Patrick.

Illinois State got on the board with a 3-point jumper from freshman guard Mary Crompton. Following Crompton’s basket, a 3-pointer from senior guard Tete Maggett gave ISU the lead, 6-4.

Scoring went back and forth between the Salukis and the Redbirds, but Illinois State took the lead once again with a layup under the basket from senior forward Lexi Warren.

ISU kept the lead throughout the first quarter, while SIU only scored four more points on layups from junior guard Makenzie Silvey and Patrick.

Illinois State ended the first quarter with a single free throw from Redmond making the score 17-12.

SIU went on a seven point run after scoring the first basket of the quarter with a layup from Brockmeyer, a 3-pointer from Patrick and two made free throws from Martin to give the Salukis the lead, 18-17.

ISU regained the lead with two driving layups from Saylor and a 3-pointer from sophomore guard Kayel Newland.

The first half ended with Saylor making two free throws off of an SIU foul to extend the Redbird lead 28-22.

SIU senior guard Kristen Nelson started the second half with a jumper, but Illinois State went on a seven point run to combat this starting with a jumper from freshman guard McKenna Sims.

In the last two minutes of the third quarter, Southern scored five points on a layup from Patrick and a 3-pointer from junior forward Rachel Pudlowski.

A 3-pointer from ISU senior forward Megan Talbot made a 3-point jumper to close out the quarter.

A stepback jumper from Maggett lengthened the Illinois State lead at the start of the fourth quarter and Martin answered with a pair of free throws, but SIU trailed 42-38.

Even though SIU was able to score consistently, the Redbird lead was too great for them to the gap.

Two free throws from Maggett secured the ISU win, 66-56, in the last 30 seconds of the game.

The Salukis take the floor again on Mar. 5 at 6 p.m. where they will take on Loyola University Chicago at Banterra Center.

Sports reporter Janae Mosby can be reached at [email protected] or on Twitter at @mosbyjanae.