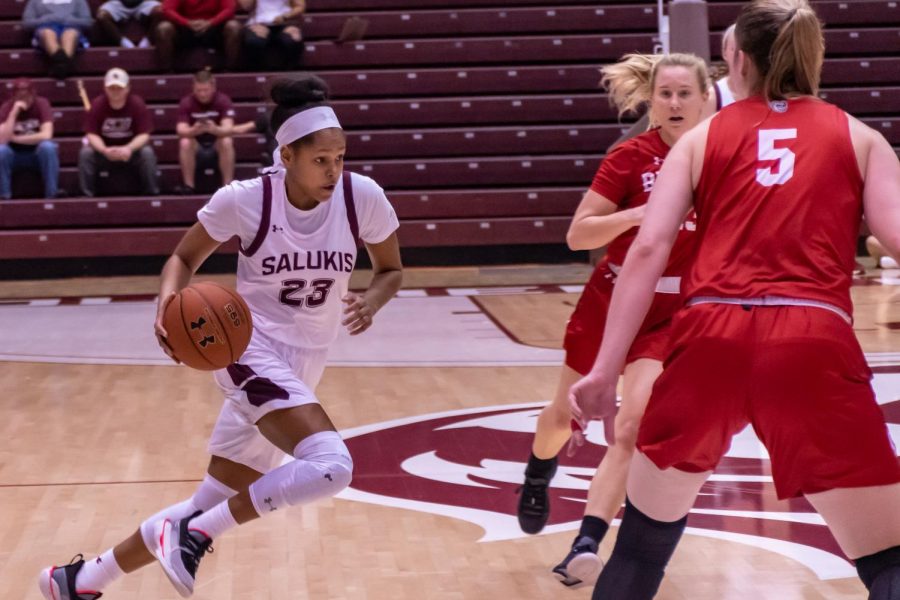 Guard Kristen Nelson flies down the floor in a game against Bradley, SIU takes the win 60-54.

A three-point jumper from senior guard Kristen Nelson in the final 30 seconds of play appeared to have rescued Southern Illinois from another heartbreaking loss to Bradley University this evening, but foul trouble in the remaining time allowed the Braves to run away with a 61-57 win over the Salukis.

Junior guard Makenzie Silvey was SIU’s top scorer with 16 points. She was followed closely by Nelson and junior forward Abby Brockmeyer, who each tallied 12 points.

Play was close in the first quarter among the two teams, with the score tying three separate times in the period.

At the five minute mark, SIU (15-11,7-8 MVC) ran into a scoring drought on offense with their last basket of the period coming at this time on a layup from Brockmeyer.

From here, the Braves went on to score two more baskets extending the one-point lead they previously held over the Salukis and making the score 15-9 at the end of the quarter.

A layup from SIU junior forward Gabby Walker and a pair of free throws from sophomore guard Caitlin Link cut the Bradley lead down to three points within the first two minutes of the period.

The Braves continued to keep their momentum on offense and the Salukis followed suit giving an answer to every Bradley basket scored.

Southern got within two points of Bradley (19-6, 10-4 MVC) with a 3-pointer from junior forward Rachel Pudlowski and a layup from Brockmeyer, but a 5-3 scoring run in the remaining minutes from the Braves would allow them to keep a 27-32 lead entering halftime.

Brockmeyer was leading the Salukis in scoring and rebounding with six points and three boards, while three of the Braves’ players were tied for the top scoring position with nine points each. These players were junior guard Gabi Haack, Petree and senior forward Chelsea Brackmann.

At the beginning of the third period, the Braves scored two unanswered baskets to push their lead within one-point of reaching double-digits, but an SIU charge that featured two layups from Brockmeyer and a three-point conversion play from senior forward Nicole Martin kept the Salukis close at 36-34.

Similar to the previous quarters, Bradley found its footing to go on another scoring run that would help the team distance itself from Southern. This 7-1 scoring run was headed by Petree, who scored a layup, free throw and 3-pointer during this time.

The run ended scoring in the quarter and gave the Braves their largest lead of the night, 50-35.

More than halfway into the fourth quarter, Silvey drained three consecutive 3-pointers to put SIU back into the game. These 3-pointers were followed by a pair of free throws from Nelson.

Bradley had gone five minutes without a basket and after the Southern scoring display, Braves head coach Andrea Gorski was forced to call a timeout as her team’s lead had been cut down to six points at 54-48.

With one minute remaining on the clock, a pair of free throws from Brockmeyer had put SIU within just three points of Bradley with the score at 57-54. Prayers were answered when a three-point jumper from Nelson went through the hoop in the remaining 30 seconds to tie the game 57-all.

A foul committed by the Saluki defense in the remaining seconds allowed the Braves to pull ahead by a single point. Southern was unable to to close the small deficit on the next possession and was forced to foul, sending Bradley to the line two more times.

Haack and Brackmann were the shooters and the pair made 3-of-4 free throws to extend the final score to 61-57 and solidify the Bradley win.

After tonight’s loss, the Salukis will travel to Normal, Ill. to take on the Illinois State University Redbirds on Sunday, Mar. 1. Tip-off is set for 2 p.m.